I’ve just directed a film that was shot all around the world, without moving from London. I’ve received more than 10 hours of raw footage in 100Gb of data.

The film “La V al món” (The V around the world) shows how thousands of Catalans make public demonstrations in dozens of countries. It’s the prelude to the huge human V that’s going to take place on 11 September in Barcelona, where more than a million people are expected for the Catalan National Day. They claim to be allowed to vote about their independence in a referendum.

Every local Catalan Assembly was filming their event. It was my job to coordinate the teams, give them guidelines, be in touch with them and ask them to send me the raw footage promptly so that I could start logging, selecting and labelling the good shots.

I had outlined how I wanted the story to be told, but it was a mystery what kind of footage I would receive. I know there were a number of film professionals taking care of the shooting in some locations, but my crew was mainly amateurs. So the shape of the story wouldn’t be certain until I had logged all the 10 hours of footage I got. After this, I had in my Final Cut Pro X project organised in 18 keyword collections. It was time to start building the timeline. 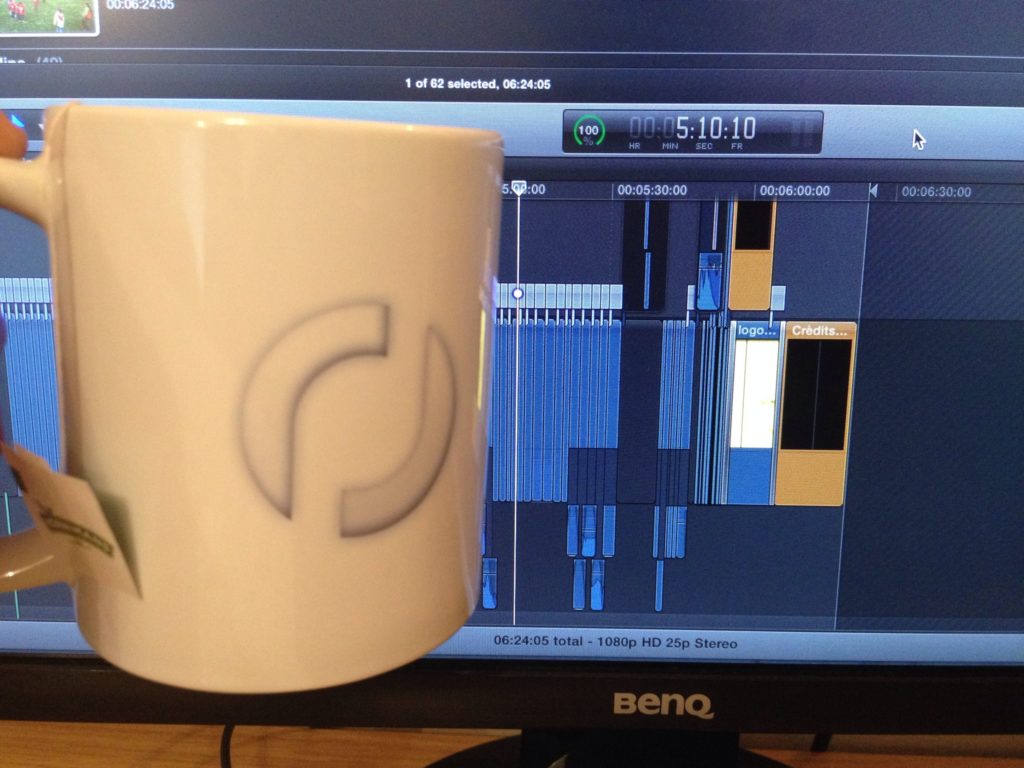 I’m good making good ideas look awesome. I knew I had to show the emotional dimension about the issue, so I had a pretty clear idea of the editing structure. I wanted to show it as a common story, which it is. The same event happening in 100 different cities in 5 continents, at different times. I would alternate all the scenes for the audience to perceive it as a common story happening simultaneously.

I achieved this by alternating the resources I had: interviews, B-roll, aerial shots, stills… First we show where we are. Then we say where we are. We show people arriving. Then some interviews explain the reason of these demonstrations, show the atmosphere, some more interviews of non-Catalan people to show the support of the world, then people preparing, taking positions. And finally the actual human Vs, shown of course in an uplifting sequence. First the stills, the small Vs, the quiet ones, slowly growing up in movement and cheers and then the spectacular drone shots, the massive ones.

And to end the film, what I call the final fireworks. A last succession of the best images we’ve seen, plus some tiny interviews that serve as a brief, and the last super-fast arrangement of the finest shots combined with the animation and the music at its peak, leading to the final logo and slogan, staying there for a while after the big climax. And credits roll.

Music is very important in my films. It is paramount in order achieve the emotional response I look for. I was very lucky that I bumped into Jordi Guillem. He composed some very powerful songs for the Catalan Assembly and kindly gave them to me. He insisted that I should use his sung version as well as the instrumentals bits. I wasn’t too keen, but it ended up being a key part of the montage.

For the final chapter of the film, the one where the culmination of the Vs, I needed a powerful music. Again, I used Jordi’s outstanding song “Ara és l’hora”, specially composed for the Catalan cause. I needed a longer piece, though. So he kindly sent me every single track so I could make my own mix. And it worked great.

Although music is part of my life, I hadn’t mixed music for a long time. I had a great time experimenting with the tracks, the balance, the effects, and putting them together to make it sound good. No melody when we hear someone speaking in the video, a bit more drums here, louder pad, lower guitar… It’s been a privilege to be able to adapt an awesome song and put it in sync with the video exactly the way I needed.

This is a massive project. 8,000 people attended the events around the globe. 86 people are credited as camera operators but many many more contributed to make it. From the beginning I wanted to make it collaborative as well in the edition stage. I set up a Dropbox folder to share the library files and the original media, so that other filmmakers using Final Cut Pro X could help me sort out and catalogue the raw footage. Finally it didn’t work out as I intended, so I ended up doing most of the work myself. Not all of it, though.

I have to thank Ona Estapé for the gorgeous colour correction and transcription of the interviews. And David Fiz for the motion graphics. And of course Jordi Guillem for the music. I think I like it even more than my beloved Josh Woodward. And of course my friend Alex.

We published the film on Monday afternoon. Its purpose is to lift the spirits just 3 days before the huge V takes place in Barcelona on Thursday, where it’s going to be screened. So far “La V al món” has over 28,000 views in the first 48 hours.